Words of Wisdom from the Marathon Woman

Words of Wisdom from the Marathon Woman

I recently had the amazing opportunity to sit down and interview Kathrine Switzer, best known as the first woman to run the Boston Marathon as a numbered entry in 1967. This monumental event helped start a revolution in women’s running – both competitively and recreationally. Kathrine is now an American marathon runner, author, and television commentator, as well as founding 261 Fearless, a global non-profit organization of women.

I absolutely do have some tips for you and it’s not too late. You still have a month to go here. What you really should do is if you haven’t yet, you should be practicing, not uphills, but downhills. The first half of that race is more severely downhill than you can ever imagine. And the, these quads sees my muscles tighten up. So by the time you start the uphills and the second half, those are really tight and it feels like torture. So practice some downhill running, especially coming out of Hopkinton. That’s a very deep and that would be a great place to just go out there and start running down that hill. And the other thing is, is what I tell every runner as the Olympic athletes make this mistake as well, which is if you start too fast, you’re gonna finish slow and it’s torturous. You’re going to run out of gas!

So make sure to practice those downhills, make sure you don’t start too fast, keep it in check and make sure you have some gas in the tank. But you get to the top of Heartbreak Hill at 21 miles and it actually isn’t as bad as they know. Heartbreak Hill is not bad at all. The hardest hill in the course is one they never even talk about is the one that’s crossing the highway one and it comes and then it shakes your confidence because you say, wow, this is so bad. What about the next three and the next three you can roll into the one at 16 miles.

I ran part of the course for the first time a couple of weeks ago. And I started on Boylston and I ran backward and it was all downhill and it’s just like, oh no, how am I ever going to make it back from here?

OK, next one, go out to Hopkinton and then you know what you go out and, and even if it may be now too late to do a long run for you, but go out and parked at mile 14. Go to Wellesley, run from Wellesley, out Wellesley, and then up over the hill at 16 and then do another couple of hills. So do a good deal. A good five or six miles. So that’ll be a really good training room for running Boston.

Do you think you’ll ever run Boston Marathon ever again?

I’ll run Boston again sometime, but not this year. Last year was so spectacular and so important. My bib number was retired at the end of the race, which was really gratifying. You know, that I decided not to run this year and I probably will come back on an anniversary, maybe may 75th birthday or maybe my 80th. It’s all about confidence. But I have a wonderful team of women this year running for 261 Fearless and I’ll certainly be there at the finish line to greet them!

To see some of my interview with Kathrine Switzer, click below: 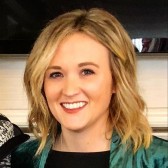