When Maura walked through our doors in April of 1976 just after a move up from the Carolina’s and looking for a job, little did she or we know that Maura would keep at it for the next 45 years. Not hours before she cold-called at The Lenox, the housekeeping manager at the time had just had to let go of two housekeepers. Upon hearing that Maura had previous housekeeping experience, she asked if Maura could start the next day. What luck!

What else was going on in 1976? Gerald Ford was President. The S&P 500 was little over 101. A gallon of gas was 59 cents. And Maura and the other housekeepers started at $2.63/hour. Things have changed just a little since!

After 45 years, Maura decided that it was time to retire. What better time to do it than during Housekeeping Week, the week where we particularly celebrate the incredible team that keeps our hotel sparkling! During her speech at her celebration lunch, Maura joked that she has only been written up twice in 45 years, a pretty good record by any count! A staunch advocate for her fellow employees, Maura was deeply involved in employee relations during her decades at The Lenox. Our hotel won’t be the same without her here daily, but it certainly is changed for the better since she serendipitously walked through our doors 45 years ago. 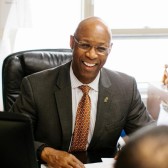