If you’re an avid beer fan like myself, then you have definitely heard of Tree House Brewery. Since opening in Western Massachusetts in 2011, it’s become one of the most sought after breweries in New England and beyond.

The only way to normally try one of these infamous beers is to drive to their brewery in Charlton which is about 60 miles west of the city. I finally made it out their last summer. It’s located on a beautiful country hillside overlooking Central MA. I had heard it was a very busy brewery but was still a bit shocked by the lines when we arrived which was on a Tuesday, middle in the afternoon. One line for people to order beer to drink on the premises and another for people who were buying beer to take home. There were so many folks with hand trucks, I had never seen anything like it before! I definitely recommend giving yourself a few hours to truly experience the brewery because once you get there you going to want to sit back in one of the many Adirondack chairs that overlooks the beautiful hills with a beer and enjoy the atmosphere.

And if you can’t make it Charlton then hopefully you will be able to attend one of their pop-ups at The Prudential Center this summer! It’s the first time they have done something like this in the area. It will be taking place on Thursday, June 27th, Thursday, July 18th & Thursday, July 25th. Hope you get a chance to try it! A few of my favorites are Haze, Lights On, and Bright. 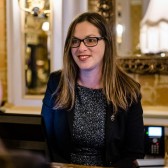