I came of age as a Pats fan in the 90s, suffering through the terrible teams early in the decade and witnessing the beginnings of a dynasty. I remember Tedy Bruschi getting drafted in ’96, playing a ton as rook for Parcels (no easy task!), and being a force in that Super Bowl. I have a really fond place in my heart for those Bruschi-Milloy-Law defenses of the late 90s. By the time Brady and Belichick were rattling off Super Bowls, Tedy was the linchpin of that D!

At The Lenox, we are lucky to have a special, personal relationship with Tedy. Tedy’s Team does incredible work raising awareness fighting stroke and they have used The Lenox as their home base for the Boston Marathon for 15 years. More recently we’ve teamed up on charitable work including our Room In Your Heart initiative and the Bruschi Burger here at Solas.

So, it’s with great excitement that we announce a special Patriots vs Giants viewing party! On Thursday October 10th, join Tedy at The Lenox as he gives a pre-game intro and halftime analysis while watching the game on large screen TVs in our comfy second floor space. There will be tons of yummy food and a cash bar along with awesome auction items all to benefit Tedy’s Team. This is a once in a lifetime opportunity! Have you ever seen Tedy on ESPN? He’s almost as good at talking about football as he was playing it! Secure tickets here.

Check out this highlight video to get you excited:

Picking off that pass in the snow against the Fins with the Foxboro crowd hurling snow into the air:

2004 Divisional round when he pops Dominic Rhodes and rips the ball away from him for the turnover. See it here at the 22 second mark:

Book your tickets now! You don’t want to miss this! 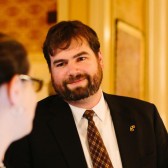